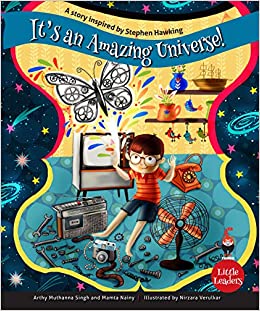 Its an amazing universe-A story inspired by Stephen Hawking

In Stock
Add to Wishlist Add to Cart

When Stephen Hawking was a little boy, people often called him odd. He was different. When the other kids were busy playing and having fun Stephen wondered about the mysteries of the space, stars and beyond. But then a sudden bout of illness changed his life forever. But Hawkings wasn’t one who’d give up so easily. He fought his illness, overcame disabilities and his genius and endless curiosity powered his work. He went on to make several revolutionary discoveries, including the black hole theory that shook the science world.

Beautifully illustrated by Nirzara Verurkar and movingly told by Arthy Muthanna Singh and Mamta Nainy, the story of a little boy who overcame all odds and went to be become one of the greatest astrophysicist of all times—comes blazingly alive for the little ones.

It’s never too early to introduce your child to the people you admire.

Here’s a collection of beautifully illustrated picture books for children aged 5 to 8 years. Each book in the Little Leaders series will introduce young readers to an incredible story of people who followed their dreams, despite all odds. These tales of passion and courage will emphasise that turning-point in the lives of role models, some of them as old as the readers themselves. Both parents and children will appreciate these moving stories of grit, determination, perseverance and using the imagination.